If the PWM is 50% mark-space then the baseband analogue signal is attenuated by half. Clearly you need to use a recovery filter to remove switching artefacts. But with this technique you can amplitude modulate an analogue signal by varying the PWM duty cycle: – 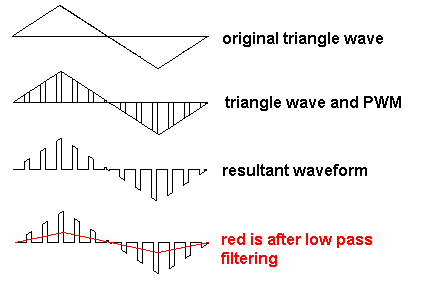 These things exist – Analog devices (used to?) have some multiplier ICs you can (could?) buy. They also have this excellent appnote which I definitely suggest reading.

One of the classic buildingblocks in analog design is the Gilbert Cell, named after Barrie Gilbert. It does what you seek (at least, if I understand your question correctly). Because of this multiplying capability, it is very often used as a building block in variable gain amplifiers. Think about it, if you have a building block that has a input-output relationship given as $ V_{OUT}(t) = V_{IN, 1}(t) cdot V_{IN, 2}(t) $ and you set $V_{IN, 1}$ as the signal you want to amplify, you just need to change $V_{IN,2}$ to control your gain. It is also used as a mixer for the same reason.

I am just putting this out here as a viable answer for future readers.

After reading Joren’s answer I realized that many analog multipliers rely on matching components. So I thought to myself, why not just reuse components so the same component is used everywhere? That way I will automatically match everything.

So I looked up the typical diode based multiplier and saw that the anodes of all the diodes are always connected to the (-) input of the op-amp. Same goes for one pin of the 1 kΩ resistor. 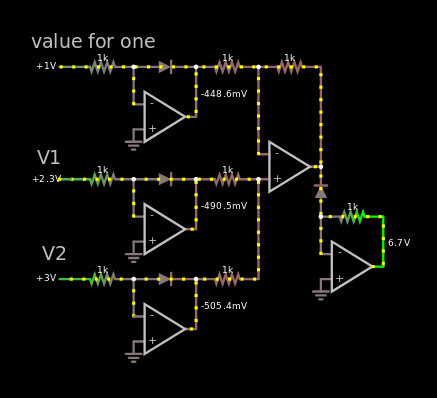 So I decided to mux the cathode and the other pin of the 1 kΩ resistor and voilà, there’s a nice logarithm and exponential function that is matched. You can see in the gif below.

I know it says “log(x) in base y” and “pow(y,x)”which is not true. I confused myself with the voltage reference. It’s just log and pow with some random base. The clever mathematicians will know that it doesn’t matter what the base is, you can convert any log to any other log.

The number 6.7 is shown at the end at the output of the bottom right op-amp. CircuitJS truncates 6.75 to 6.7 when presenting the numbers without any mouse hovering. Placing the mouse above showed 6.69 V, so 60 mV error which is less than 250 mV and therefor acceptable. According to.. not the best simulator.