Solution for Overlay third-party data in Google Maps official apps?
is Given Below:

Is there any way to add a layer of custom data (points, areas, etc) with metadata (info boxes which appear when the item is clicked) over top of the official Google Maps apps?

I sadly cannot figure out when or where, but I am 100% sure I have seen an extra toggleable layer with definitely-third-party data on someone’s Android device in the past, definitely on the official Google Maps app. I believe it appeared alongside “terrain” and those other toggleable layers.

Obviously this would be something the user opts in to. I haven’t been able to find documentation about anything like this — I’ve been looking for things like ways to load in KML data and so on, but everything seems to point to the Javascript API.

This is possible, to some extent, with Google My Maps.

If a Google My Maps map is shared publicly, and a user adds it to their saved maps, it’ll appear in Google Maps on (at least) the web and Android.

Here’s how it looks in Android (Google Maps menu -> Your places -> Maps): 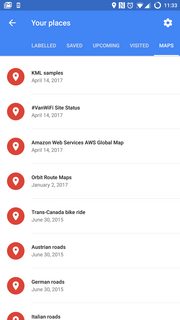 And once activated it can remain visible while getting directions: 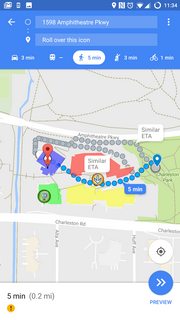 On the web, however, I haven’t found any way to keep the My Maps overlay visible while getting directions.

I’d love to hear of any other ways to do this, or any way to make the web version of Google Maps display such a layer at the same time as directions.